Scorpions are fascinating creatures that have captured our attention through time. They have played a major role in our belief systems, such that there’s even a constellation named after the venomous creatures.

Their appearance and qualities frighten most people, thus dreams about scorpions have been long associated with negative emotions and events. 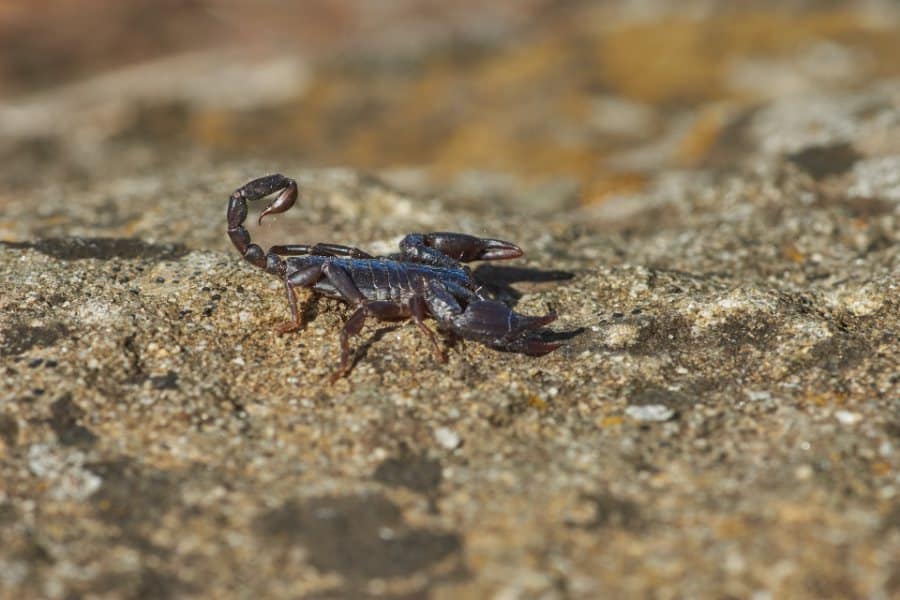 Scorpions are a symbol of death and rebirth, passion, and power. They appear in your dreams to put emphasis on what is happening in your relationships and other areas of your life at the moment.

But remember, dreams often carry different symbolism based on the dreamer’s current experiences, as well as the dream’s narrative, characters, and images. Scorpion dreams are no different.

If you recently had a dream about scorpions, we are here to guide you toward the possible meanings and interpretations of your vision.

What Does It Mean to Dream About Scorpions?

Scorpions rarely appear in the dreamscape and when they do, they reveal hidden aspects of the dreamer. Through time, scorpions in dreams have been associated with bad omens. However, this all depends on how you perceive the scorpion in your waking life.

Generally, scorpions in a dream portray your relationship with the people you surround yourself with. Perhaps you have enemies among the people you consider friends, or you’re trying to incorporate yourself into a new circle of friends.

Also, a giant scorpion reflects the decisions you’ve made or will make that will greatly affect your life. The scorpions also warn you to watch your tongue lest you want to cause irreparable damage to your relationships.

Spiritual Meaning of Scorpions in A Dream

Ancient civilizations believed scorpions had a powerful connection to the spiritual realm. They even depicted their deities as scorpions or with scorpions. For example, the Egyptian goddess of fertility, medicine, and healing–Serket, had a crown adorned by scorpions. The scorpion was also her avatar.

Additionally, the Babylonians considered scorpions the guardians of the gods and the godly realm. They also were included in the Babylonian zodiac, which is the origin of the modern zodiac.

Scorpions are a symbol of death and rebirth. Dreaming of scorpions was meant to draw your attention to the cycle of life; to accept the things you cannot change and to embrace the things to come.

In Buddhism, scorpions represent harmony, tranquility, protection, and peace. They appear in your dream to warn you when any of these aspects of your life are out of balance.

Scorpion Symbolism in A Dream

You May Have Unknown Enemies

Scorpions appear in your dreams when there is ongoing tension between you and the people in your circle. Maybe you did something wrong against someone in the group, and now that individual considers you an enemy.

Having enemies among the people you trust can significantly affect your emotional state. You might approach them with sincerity, yet they treat you with indifference. This might trigger you to be anxious, insecure, or depressed.

If caught in such a situation, especially if it’s someone you’re in daily contact with, try to reach an amicable compromise. Also, try to understand a person’s feelings and motivations toward you before you engage them.

Dreaming of a scorpion implies that you’re holding on to a shameful event from your past. You’re stuck in a cycle of guilt and coming up with alternative solutions to a situation. You wish things didn’t turn out the way they did.

Holding on to that past is unhealthy. It hinders your growth and dampens your happiness. If you regret what you did, it is wise to make amends. Forgiving yourself and the other party is definitely a good start.

Seeing a scorpion in a dream is a sign that you should let go. You cannot change the past, but you can learn from it. By accepting your past, you can kick-start the help process and mend what you broke.

You Need to Take a Break

A scorpion attacking you in a dream suggests you lack balance in your life. It means you need to take a step back from your daily life and reevaluate yourself.

You might find yourself overwhelmed by responsibilities and forgetting to relax. This affects your overall health and emotional well-being.

A scorpion in a dream warns you that you need to slow down. Plan your time well and prioritize what’s important. Don’t pressure yourself to do everything at once. Give yourself time to relax and unwind.

No matter how hectic life gets, always remember to prioritize self-care. Maintaining a healthy diet, exercising daily, and keeping in touch with your loved ones is a way to go. Always remember, it’s okay to take a mental wellness day. Everyone needs to recharge after a while.

Most species of scorpions are venomous. That’s why we steer clear of them even in our waking life. A scorpion appearing in your dream is a sign of impending danger. It implies something bad will happen soon and you’re unaware of it. Because of this, you will be heavily affected.

Similarly, you could be approaching a challenging period in your life. The scorpion dream tells you to prepare yourself for the difficult times ahead. You should take this warning seriously and fortify all areas of vulnerability.

A dream involving scorpions signifies betrayal from those closest to your heart. The saddest part is you might not see it coming.

This dream suggests that you’re unaware of their feelings or what changed their intentions towards you. Perhaps your partner will cheat on you or your friend is plotting against you with someone you consider an enemy.

Scorpions are a warning to reevaluate your relationships and be cautious before you trust someone. This will save you from a world of hurt. 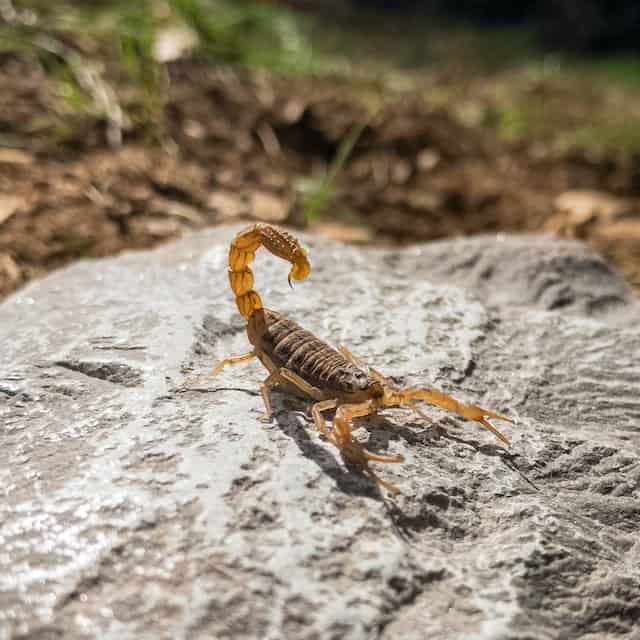 1. Dreaming of a White Scorpion

A white scorpion in your dream is a good omen. White scorpions signal inner peace and contentment. You have achieved the objectives you had set for yourself and are satisfied with the current state of affairs in your life.

Alternatively, white scorpions symbolize hope. You might be going through a difficult period in your life and it seems like circumstances aren’t about to change any time soon. This dream is an assurance that all is not lost.

2. Dreaming of a Yellow Scorpion

Traditionally, yellow or gold were colors associated with wealth and prosperity. Therefore, dreaming of a yellow or golden scorpion became the symbol of good fortune, luck, power, and abundance. Yellow scorpions meant you will achieve great success in life.

Also, dreaming of yellow scorpions means your hard work will finally pay off. You will attain financial stability and all your investments will push through.

However, stepping on a yellow scorpion in a dream indicates financial troubles headed your way. It could also mean that someone you know is determined to make your life a living hell.

3. Dreaming of a Black Scorpion

Dreams involving black scorpions might seem like nightmares. These scorpions are a harbinger of bad luck, poor health, and death. This does not specifically refer to you, it could also refer to your loved ones or colleagues.

Black scorpions foretell the deterioration of your relationships with the surrounding people. This will arise from a difference in opinions or beliefs and a lack of compromise.

This stubbornness from either party might cause you to lose some close friends or end up cutting ties with some family members.

Black scorpions also appear to warn you about your bad habits or toxic environment. It is a sign to make the necessary changes or else you will end up failing in your endeavors.

4. Dreaming of a Red Scorpion

Red as a color has been used to depict feelings of love, passion, and desire. Dreaming of a red scorpion suggests you should immerse yourself fully into something you’re passionate about. Bring your creativity and enthusiasm into a project and watch as something beautiful emerges from your hands.

Similarly, dreaming of a red scorpion tells you to jump back into the dating pool. However, if you’re in a relationship, it’s a sign to delve deeper into your relationship. Find the things that evoke desire and passion for you and your partner.

5. Dreaming of a Brown Scorpion

Dreaming of a brown scorpion implies trouble in paradise. Your relationship is cracking under pressure and there is a lack of communication between you and your partner.

It is advisable to approach your partner and work through your issues if you want to have a clear path forward. Open communication will help you understand if you need therapy or if it was just a matter that could be resolved by talking.

6. Dreaming of Being Attacked by A Scorpion

A scorpion attacks by stinging whomever it deems a potential threat. The sting is rather painful and has severe effects, but does not cause instant death. Therefore, dreaming of being attacked by a scorpion implies an unconscious fear of facing your problems.

A scorpion attacking itself in a dream indicates self-esteem issues. You’re constantly comparing yourself to other people and their achievements. This has caused you to have low confidence and low self-esteem.

7. Dreaming of Being Bitten by A Scorpion

Being bitten by a scorpion in a dream could mean you will face betrayal from the people around you and become a victim of your enemies. You’re surrounded by toxic people who only wish to see your downfall.

Conversely, the dream implies that karma is about to get you. It warns you to be ready to go through some tough times because of your harmful actions toward other people.

Also, it could signify your fear of dealing with the consequences of your hurtful actions toward other people.

8. Killing A Scorpion in A Dream

Dreaming of killing a scorpion in a dream carries very positive connotations. It’s a dream that tells you to venture into new businesses and investments. Not only will you succeed, but also your productivity will be at an all-time high.

Killing a scorpion immediately after it has harmed you implies that you will retaliate against your enemies and succeed.

9. Failing To Kill A Scorpion In A Dream

If you tried and failed to kill a scorpion in a dream, it means that you have recognized a problem in your life and are working towards a probable solution.

However, if you tried to kill a scorpion by burning it but it survived, it denotes a loss of control over your life and acceptance of defeat.

Alternatively, it could mean that you failed to overpower your enemies, and they have succeeded in sabotaging you. It could also mean that you have failed to recognize the false friends in your inner circle.

10. Seeing A Dead Scorpion in A Dream

A dead scorpion in a dream is a symbol of freedom; emotional, mental, physical, financial, and spiritual freedom.

You have been feeling oppressed and unable to express yourself for a long while. This dream implies a shift in power because of all the hard work you have put into liberating yourself.

Also Read: Dream About Ants: What Does it Mean?

Dreams about scorpions are a rare occurrence. They usually occur when you need to get a clearer picture of how you relate to the people around you and the world. These dreams can represent warnings from your subconscious or motivate you to push through with your plans.

Scorpion dreams tell you to be cautious of the people you trust. They might turn against you at any moment. However, they also encourage you to trust yourself.

Understanding the meaning behind your scorpion dream gives you the chance to change your life for the better.