What is the Meaning of Dreams About Lightning?

Lightning is a true force of nature and it is a portrayal of raw power. It is an electrical discharge that is a result of imbalances between the ground and storm clouds, or within the clouds themselves.

Lightning can completely destroy an object when it hits it. For this reason, dreams about lightning can be a symbol of destruction and creation.

Dreaming about lightning can be one of the worst nightmares you have, but they also carry messages that you shouldn’t ignore.

The Symbolism of Lightning Dreams

Lightning can be a symbol of a lot of things. It could mean an unexpected turn in the dreamer’s life, the need to take action quickly, or a warning sign that something is going to happen.

In this section, we will talk about the different symbolisms of lightning dreams.

Lightning and electricity are connected to each other and contain energy and power. Lightning is not always linked to destruction; instead, it can also be a positive sign related to improvement and creation.

Lightning can be a symbol of a project or a task that will bring you success. Getting hit by lightning could be a metaphor for getting motivated and inspired.

You might have a eureka moment about some problems you’re facing and find a solution for them. Maybe you’ll think of a creative and innovative business idea that will help you progress.

As we mentioned, lightning destroys things once it hits them. However, destruction can sometimes also be a good thing.

Because lightning doesn’t only destroy good things, it also destroys terrible things. This dream could mean the elimination of bad things in your life and the creation of space for new and better things.

Seeing a lightning strike in your dreams could mean that you’re life is going to take a shocking turn, and things will change in a way that you weren’t expecting. The sudden lightning in your dream symbolizes the shock you’re going to experience with this change.

A bolt of lightning in your dreams could mean that some unexpected events are going to happen, and they’re going to require your attention. Something in your life is really important, but you’re not focused on it, and this dream is a signal to concentrate.

There could also be something in life that you need to look through from a new perspective. Some of your opinions and beliefs are outdated and you need to reevaluate them.

Dreaming about lightning could mean that there are a lot of pent-up emotions in you and that you need to balance your inner self. If you don’t try to improve your emotional well-being, things might end up catastrophically.

Lightning can be explosive and destroy anything in its way. In the same way, you shouldn’t let these explosive emotions cause a disaster.

For this reason, you should talk to your close ones about your emotions, or find ways to express them better.

Lightning comes and goes with a bat of an eye. If you see a flash of lightning in your dreams, it could mean that there is tension inside you, or that you feel like you’re under pressure.

Try to examine your life and find the source of the pressure. Then, do whatever you can to alleviate or completely eliminate the tension.

These negative feelings are making your life harder, so to perform better, you need to cut them off.

In Christianity, lightning is seen as God’s Wrath. If you’re into comics, you know that a bolt of lightning means that Thor is coming.

When we were kids, adults told us that if we did something sinful, we would get smitten by lightning. For this reason, dreams about lightning could also be a symbol of punishment.

You might find yourself coming up with different ideas, and it’s important to write them down so you don’t get lost in the process. Make sure you harness all of this creative energy, so grab a notebook and start!

As we all know, lightning is shocking and swift, and you can miss it if you blink. Dreams about lightning could be a signal that you need to be quick because things are urgent!

You shouldn’t hesitate, but instead, you should go with Nike’s motto and just do it!

Because lightning bubbles up in the clouds before it gets out, it could also mean fulfillment, closure, or completion. Having a dream about lightning could mean that you’ve finally found the answer to a question that’s been bothering you, or you’ve resolved a challenge that kept you up at night.

You’ve probably heard of Thor, the powerful but arrogant god of thunder. You might even have a crush on Chris Hemsworth.

When he was young, Thor’s limitless were tested on dangerous and hard missions. Finally, he became worthy of the hammer he carries around with him, which wields destructive powers.

Because of Thor’s backstory, lightning can also be seen as a symbol of aggression and violence.

Electrons are what create electricity, and they have a negative charge. Moreover, if you ask people around you how they feel about lightning, they will probably express their negative opinion toward it.

In this context, dreaming about lightning could be a sign that bad energy is coming your way, or something bad is already happening.

Biblical Meaning of Lightning in Dreams

Lightning and thunder are often referred to in Scripture, and they are under God’s control. It can signify the presence of God, whether in a poetic or literal sense, but it can also signify his judgment against his enemies.

In Exodus, God reveals himself to everyone with a very loud trumpet blast, fire and smoke, and thunder and lightning. Lightning is used in the Bible as a symbol of the Power of God, and his supreme will over his creations.

Moreover, there are moments in the Bible where God uses lightning as a weapon against his enemies. Lastly, we can also see God using lightning to indicate the impending return of Jesus. 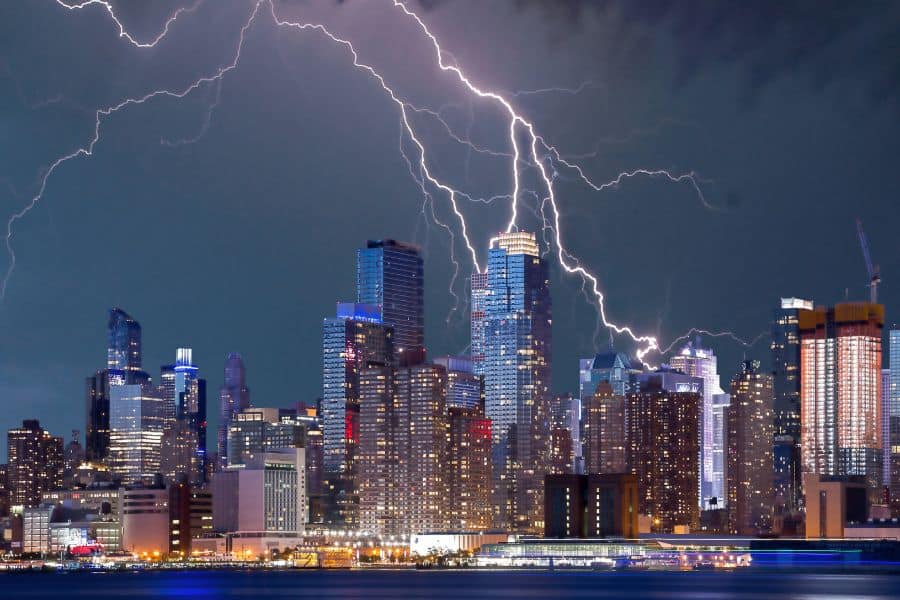 Below, we will talk about common lightning dreams and their interpretation.

Keep in mind that to interpret the symbolism of your lightning dreams, you need to take into consideration your physical surroundings, the magnitude of the lightning, and the context of the dream.

1. Dream of Lightning Striking Near You

Dreams about lightning striking near you suggest that the universe is trying to help you achieve a certain goal. However, if you’re currently in a dangerous or risky situation, this dream could also be warning you to proceed with caution.

2. Dream of Being Struck by Lightning

Being struck by lightning in a dream is considered a negative sign. It’s a symbol of a conflict or argument with your friends, family, or colleagues at work.

To avoid any unpleasant situations, you need the control the words coming out of your mouth and pay attention to your behavior and attitude around other.

On the other hand, this dream can have a positive connotation and could mean sudden insights or admiration about something in your life.

Seeing purple lightning in your dreams is a sign of success and prosperity. This dream is likely to happen if you’re currently in a difficult situation money-wise and waiting to hear some good news.

The dream is encouraging you to be more positive and is telling you that good opportunities will appear, just wait and see

4. Dream About Lightning and Fire

Dreaming about lightning and fire could represent a clash in business or future events. It’s a sign that if you’re having inconsistent feelings toward a situation, you need to sort them out immediately.

Another possible interpretation of this dream is that you’re soon going to meet someone who’s going to make a huge impact in your life. Lastly, it might mean that you might consider having an affair with someone.

You’re already in a committed relationship, but you have really strong feelings about another person. If you want your relationship to succeed, you need to avoid this third person so you don’t get tempted.

5. Dream Of Lightning and Thunder

If you see a flash of lightning and hear the sound of thunder in your dreams, this isn’t a positive sign. This dream is a warning that danger is coming your way.

Dreams about lightning and thunder are a symbol that some dangerous things are entering your life and that you should be careful about your surroundings. Even if you think that a certain area in your life is insignificant, you can still be shocked, so beware.

Dreaming of a lightning storm is also a bad omen. This dream means that a series of dangerous situations are about to happen to you.

You will feel trapped in a series of threatening events, making it hard for you to cope. In addition, you won’t get the emotional support you need from your close ones, which will make you feel frustrated.

Even though you might feel hopeless during this period, you must remember that you’re able to achieve anything you think of, you just need the determination to do it.

7. Dream About Lightning Striking a Tree 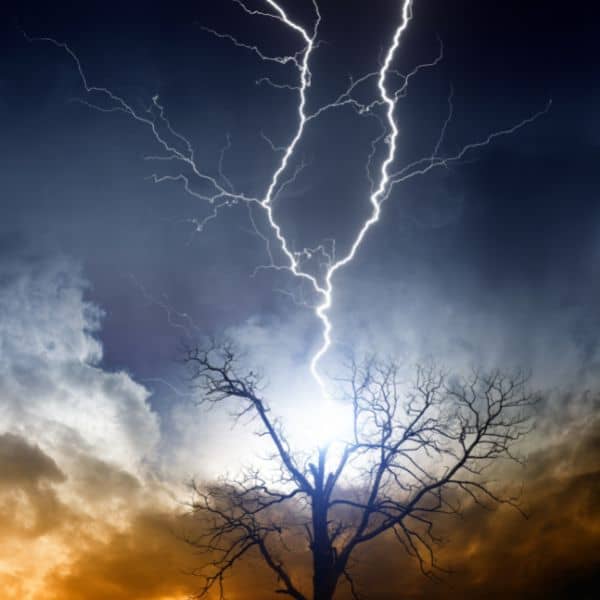 Seeing a tree get struck by lightning in your dreams could have several meanings. Firstly, it can mean that you’re feeling concerned about the health or safety of someone close to you.

8. Dream Of Lightning Striking a House

Lightning striking and damaging your house is generally seen as a bad thing. It could indicate that some tragedy is going to happen in your home or to some of your family members.

This dream could also mean that you’re going to experience a sudden and dramatic change in your life.

9. Dream Of Lightning Striking the Ground

If you’ve experienced lightning striking the ground in your dream, it could mean that a powerful event will happen and it will hugely impact your life. It can also be a message that you’re ready to move on and you feel energized to do it, but you need to think about what you actually want to do.

10. Dream Of Lightning Striking Your Partner

A dream where lightning strikes your partner is a negative sign. It could mean that you and your partner aren’t as in love as you were and that your relationship is slowly going stale.

This dream could also be a sign of cheating, so keep an eye on your partner, but be mindful of your own actions as well. Even though all of the things we said by now are negative, you need to keep in mind that you can still patch things up with your significant other.

All you need is a strong will and open communication about the things that are bothering you.

Are you confused by a lightning dream you recently had? The meaning this dream holds will greatly depend on the interactions you have in real life.

Have you ever been struck by lightning or know anyone who has been? Do you see it as a mighty force or an evil one?

Do you feel excited when you see lightning in the sky, or are you scared? By paying attention to these things in your waking life and in your dreams, you will be able to understand the message it’s conveying.